It is believed that the village started at the crossing of two Roman roads, Akeman Street and Icknield Way, both of which are still main roads in the village. After the fall of the Roman Empire, it became a Saxon settlement and remains of a Saxon cemetery were found during the construction of the Aston Clinton Bypass.

Before the Norman Conquest of England in 1066 the settlement was held by Wlwen probably under the patronage of Edward the Confessor. The village is recorded in the Domesday Book of 1086 where in Old English it was called Enstone, which means "eastern estate".

The manor, later to be know as Aston Clinton, was for a short period after 1100 under the control of Edward de Salisbury who was King Henry I's standard-bearer. In 1217 King Edward III gave it to Sir William Farendon. However, by 1237 the manor was owned by the de Clinton family, hence the name at that time Aston de Clinton. William de Clinton separated out from Aston Clinton a new manor called chivery as a dowry for his daughter Alice. Sometime after 1239, King Edward I granted the estates to the Mintacutes, who were the ancestors of the Earls of Salisbury. Their descendant the Countess of Salisbury was beheaded by King Edward VIII in 1541. Successive families owned the manor, passing by marriage from the Hastings to the Barringtons, Gerards, and then to Lord Lake of Aston Clinton later to become Gerard Lake, 1st Viscount Lake. 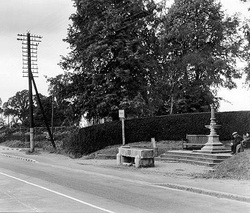